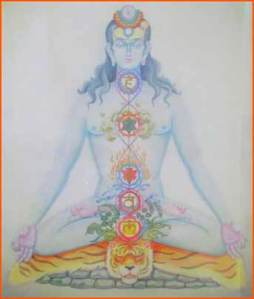 “In the basal (muladhara) chakra, the Kundalini is known as Amavasya (new moon), for at that place the sun and moon are conjoined; hence the muladhara is a dark power-zone. The next centre, svadhisthana, is flecked with the sun’s rays, hence it is a region of twilight, i.e. mixed moon- and sun-light. The third zone, manipura, is likewise of a mixed nature. On attaining the stage of Anahata, in the region of the heart, Kundalini is bathed in effulgence, and continues to be effulgent until She reaches the place of the Moon (at the vishuddha), the Qoph centre. The Ajanachakra, which represents Kundalini in exaltation, is the Pure Palace of Serene Brilliance. And so the ascent occurs from darkness, through twilight to sunlight, and finally to the cool lunar region of eternal snows which is bathed in the perpetual radiance of the Shri Chakra itself.” – Kenneth Grant, Cults of the Shadow 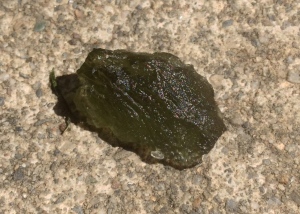 This small stone with the eery greenish lustre is moldavite, thought to originate from a meteor impact about 15 million years ago in the region of central Bohemia.

During a trip to Sedona, AZ I picked this up at one of the many Vortex crystal shops around the area. According to the label that came with the stone, moldavite was said to have some remarkable properties:

Now I must admit to being ignorant of the meaning of some these attributes (what are “star children”  for example?). Still, I was intrigued and enjoying the peaceful and mystical atmosphere of Sedona, so I took the stone into my left palm (as the left hand is generally passive and absorbing of energy inward, in contrast to the right hand which projects dynamic energy outward).

I felt an immediate affinity for the moldavite, as consciousness opened up and expanded seemingly into space. The sensation of coolness was unmistakable, and an open expanse of space and stars. I spent a good minute in the Vortex Crystal shop just “spacing out” while I held the small green piece of rock, much to the pleasure of the shop keeper!

The moldavite now rests on my shrine. I hold it in the palm of my left hand when performing mantra japa, and find that it helps to affirm a sense of openness and expansive consciousness. What better way to fly with the sky dancers in their own natural habitat then to lift off with them into space!